Hello everybody!  I hope you guys are well.  It’s a fact that exercising is great for your health, mind and body, but let’s be honest, some of us (I’m raising my hand right now, way up high), just don’t want to do it.  Why?  Well, for me it’s quite simple, I’m lazy.  There I said it.  It’s the plain truth, but I do try my best to look for ways to incorporate some type of exercise in my life.  For example, on my way home after dropping off my daughter at school, I either speed walk or do some light jogging.  People do look at me with a confused/weird look on their faces like they’re wondering, “why is she jogging?”  Um, hello people it’s called exercising.  You can do it whenever or wherever you want.

At home, I love to just drop on my floor, anywhere in the house, and do push-ups, military style.  It was my favorite at boot camp because whenever the drill sergeants made everyone drop to do push-ups, most females couldn’t do them or had bad form (butts in the air).  Not me.  I busted them out with great form, shocking most drill sergeants and loving every single second of it.  I also love doing jumping jacks and when my daughters see me, they start doing their versions, which is cute and we have a blast.

During the summer, I got more exercise in by walking to the playground with my daughters and running around with them.  Since it’s cold now we’re homebound, so in order to incorporate some type of activity at least for my oldest, I’ve started taking her scooter with me when I pick her up from school. 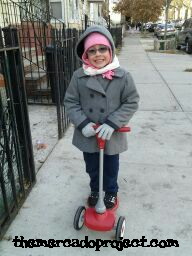 Olivia kicks and glides her way home, while I speed walk after her with Sophia in the carriage.  By the time we’re at our front door she’s usually huffing and puffing, but with a smile on her face because she loves her scooter.  I love the fact that she’s getting some type of exercise almost every day. 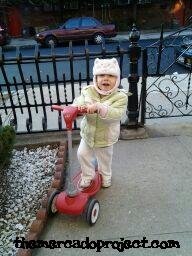 Her sister, Sophia, desperately wants to learn how to maneuver the scooter.  She has the concept down, but she’s too small.  🙂

I’m definitely going to work on my lazy attitude, but for now something is absolutely better than nothing.