Happy belated Veterans Day (THANK YOU to all veterans and those currently serving) and my thoughts are with the people in the Philippines and their worried friends and family throughout the world.  May help arrive as soon as possible and heal those in need.  May the people who lost their lives rest in peace.

So, I’ve been wondering whether or not I did the correct thing in asking for my daughter to be placed in another first grade class with a new teacher.  I got the answer this past Friday when my daughter’s teacher wanted a word with me regarding speech therapy for Olivia.  I told her that we tried to get her therapy last year while she was in Kindergarten, but due to her above average grades, they felt that she didn’t need the therapy.  Olivia’s new teacher balked at that.  We are starting the process once again in order to give my daughter the help she needs because this year it’s affecting her spelling, writing, and communicating skills.  There are certain letter sounds in which Olivia has a hard time pronouncing so if she’s writing a word that includes these sounds, she spells the word wrong.  At home we do practice with her enunciating certain words and letter sounds, but she still needs a therapist.  Within a week, her new teacher picked up on this and that’s why I’m loving her.  Also, my daughter was given her first spelling test with the words of the week, which we studied for by writing them over every day, looking at homemade flash cards, and making sentences for each word.  She scored a: 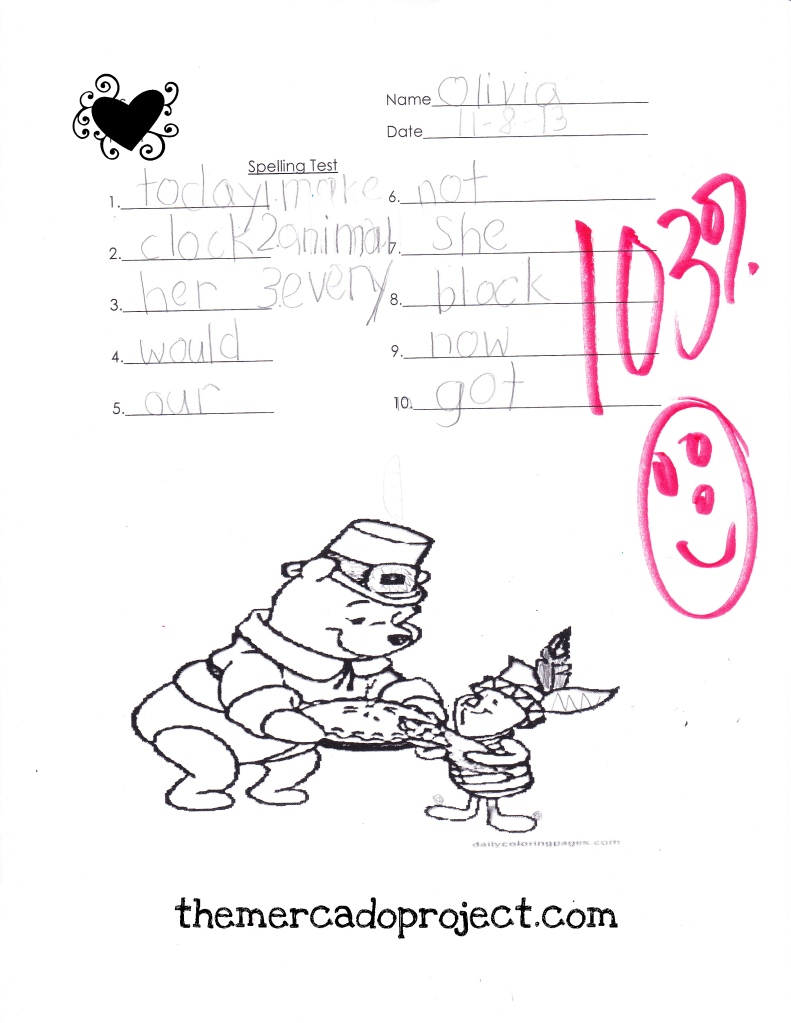 The proof is in the grade.

I did the right thing and the added bonus is a teacher who’s going to battle for my daughter to get the services that she rightfully deserves.  Last year, Olivia’s Kindergarten teacher mentioned that there was some issues regarding her speech, so we started the process of requesting speech therapy for her.  It was completely drawn out.  My husband and I scheduled and attended meetings, I wrote many letters and finally (many months later) my husband took Olivia to be evaluated, per an appointment made by the Board of Education.  This evaluation proved that Olivia was not struggling in school.  They concluded that she was above average, but that’s not what we asked for.  She can’t say certain letter sounds, but because she was achieving superb grades in Kindergarten, they decided that she would grow out of it.  That was their conclusion.  Obviously they were wrong, because it’s starting to affect her now in the 1st grade and if not dealt with, it might get worse, but I’m not going to let that happen.  No matter how many letters I have to write or meetings I have to attend, my child will get the assistance that she needs.