We’re back from vacation again.  This time around we invited our family members to join us for a week at a Massanutten resort http://www.massresort.com/v.php?pg=2 in McGaheysville, VA.  The place was lovely and the condo we stayed in was spectacular, but your wallet takes a beating if you want to do several of their activities.  We mainly stuck to the playgrounds and the pool, which were free.  The one activity we decided to pay for was going on a pony/horse ride along with petting and feeding the farm animals.

My daughters and I rode on a horse for the first time ever.  This was pretty exciting and the smiles on their faces filled my heart with sheer joy, especially my youngest who we thought was going to bail, but instead her grin extended from one ear to the other and it stayed put from the moment she got on the horse until we said goodbye to “the horsie”.  I was very proud of them because when you’re far away from the horse and just looking at them, it seems like it’s not such a big deal, but once you’re up close and about to get on, it’s a different story.  The ride wasn’t long, but it was definitely a great introduction and there are a couple of riding schools where we live that I’m going to be looking into.  Hey, you never know and the more experiences they get out of life, the better.

We also had fun at the feeding/petting farm.  I was definitely hovering over my youngest because she was getting a little bit too close to the animals and I was afraid of them biting her.  There were ducks, a turkey (who looked pretty mean so we stayed away from its cage), goats, donkeys, a camel, alpacas (my youngest, Sophia, couldn’t stop feeding these guys and she giggled the whole time with them), pigs, rabbits, and a zebra.  Yes, a zebra. 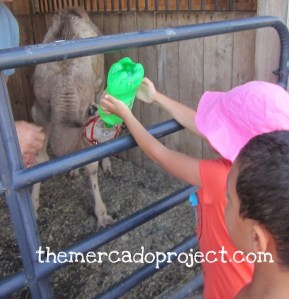 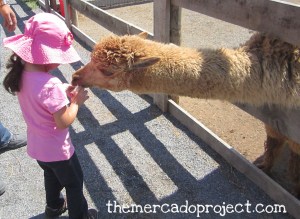 Olivia was fortunate to be able to feed a baby camel named Clyde.  She also had a lot of fun feeding the donkey who was eating up a storm.  Sophia’s faved animal was the alpaca and she also enjoyed feeding the zebra.

During our vacation I celebrated my blog’s first year anniversary.  It sort of crept up on me and I was shocked that a year had gone by even though it’s around the same time as my wedding anniversary, which I also celebrated.  My sweetheart husband and I have been happily married for twelve years now.  Our family members made a special dinner and we enjoyed it together.  We didn’t need to go out by ourselves because we wanted to be with our family and to make things less stressful we decided to not give gifts, just celebrate together and enjoy being on vacation.  By the end of the week, Olivia desperately wanted us to stay for another day and my four-year old nephew was not happy that we were leaving.  In fact, he was down right mad and didn’t want to say goodbye, but I still kissed him on the forehead real fast.  🙂  The kids not wanting to leave just showed me that they had a wonderful time together and we will definitely be doing this again come next year.  I told my sister-in-law, “Let’s make this family vacation a tradition because we all had a great time.”  I just need a calendar for 2014 so I can jot it down asap.