I believe the best toy we ever bought after having our first child was a set of colorful building blocks (STEP 2).  From the moment we received them, back in 2008, it has been non-stop fun for both my girls and visiting family members.  We corral and store the blocks in an empty, taped up diaper box.  These blocks have nurtured my children’s imagination, creativity, color and shape knowledge.  Also, let’s not forget the most important aspect of blocks, knocking them down.  If there’s ever one toy to get and keep for a while it’s definitely this one.

Today, my youngest brought out the blocks and decided to include Mario and friends (another great toy purchase because this little girl loves these plush toys to bits).  She asked me to help her build it tall so she can “bust through it.”  Okay, I told her to bust through it and she had a ton of fun doing just that. 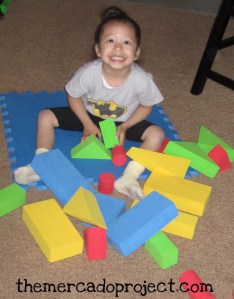 Hello everybody!  I hope you guys are well.  Christmas has come and gone and now we’re dealing with a massive toy hangover.  My daughters got so many toys that they’re walking around the house now dazed and confused.  It’s so overwhelming, even for me.  They’re jumping from one toy to the other while I’m running after them to clean up after each toy they dumped on the carpet before they move on to the next.  It’s crazy over here and I’m not even innocent to the crime of toy overload.  I’m guilty as heck.  I wanted to firmly stay at a two present limit per child, but I went completely over that limit.  I went totally mad, with happiness of course, when I saw this at www.walmart.com: 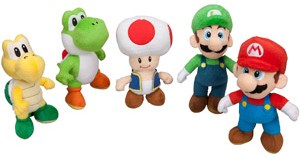 Set of 5 plush dolls of Mario and company

My oldest daughter just got introduced to Mario, so when I saw this I knew she would love these little plush guys and boy did she ever.  I almost bought them individually until I spotted the set, which saved me a lot of money.  I simply couldn’t resist myself and when I told my husband, he certainly didn’t put a stop to my craziness.  In fact, he said, “I’m not going to deny them anything,” so we’re both guilty.

I’m seeking a new plan and some major will power for next year.  Also, I need to include books in their wish list, which I did this year, but nobody gifted.  I’m going to have to emphasize this to family members that books are great gifts as well.  Yes, most kids don’t want to unwrap clothes and other stuff that’s not toys, but we have to try to change that.  I’m trying to teach my girls to appreciate any gift that’s given and not to compare how many each one gets or if one is better than the other.  It really bothers me when I see kids not being appreciative or whining that they want more gifts.  I also understand that I do create this sort of attitude by supplying all of these gifts so I’m definitely going to scale back for next year.

So no more crazy, toy madness.  I’m going to take some inventory and try to place my children in an environment that’s not over stimulating, even though I created it.  Ouch, that reality does hurt me.  My solution for now is going to be to put away some old toys while they’re playing with the new ones, give away toys they’ve out grown, for example the baby puzzles with the pegs on them (I have a stack of those that need to be given to new babies) and read, read, read a lot of books.

Hello everybody!  I hope you guys are well.  This is the time of the year where the two biggest holidays, in my opinion, start approaching full speed ahead.  As soon as that happens, I start making mental notes on how we’re going to take our Christmas picture early, because Santa Claus is already at the mall mid-November, and I start the Christmas list. Also, there are several birthdays before Christmas so I have to buy those gifts well in advance.  But we all know what happens.  Yeah, that’s right.  I leave everything for the last minute driving myself completely insane and frustrated with the holidays.  Some days I really WISH I could be that type of person that is completely relaxed.  You know those people.  They’re so chill with everything.  Nothing bothers them, at all.  That would be nice, but then I wouldn’t be me and I think through my neurotic persona I’m able to accomplish stuff that makes me and my family happy.  At least, I hope.

In a previous post, I mentioned how last year I had my daughter go through her stuff toys and take out the ones that she didn’t really play with in order to donate them.  A few days ago, we did the same thing.  I took the bin where the toys are usually stored in and explained to my daughter that it was the “keep” bin.  Then I placed a big shopping bag next to the bin and told her that was the “gift” bag.  I asked her to go through her toys and see which ones she wanted to keep and which ones she wanted to donate as a gift.  My little girl did a great job! 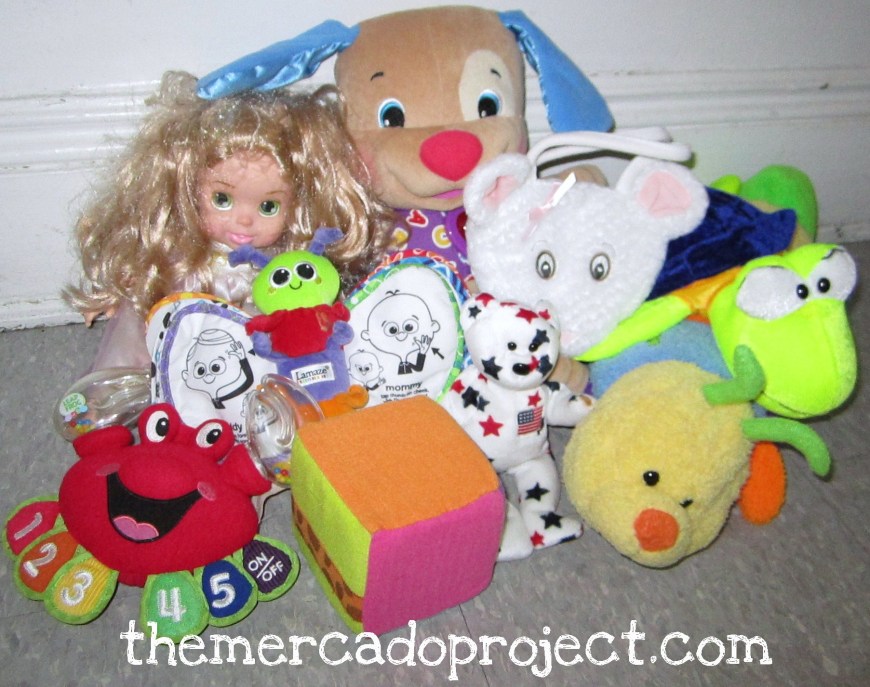 These gently used toys are going to be donated and I hope we can find some more to give before the new ones come in. 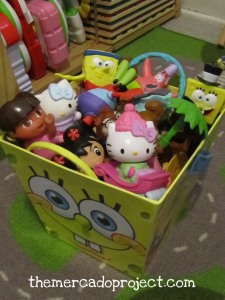 Hello everybody!  I hope you guys are well.  So today I starting cleaning toys because it’s been a while and there’s a lot to clean.  There’s about three toy bins, a doll house, a pretend kitchen, bookcase with electronic toys, and a big playhouse full of stuff animals.  Yes, my apartment sounds and looks like a day care center.  I can’t wait until I can claim my living room again. 🙂  Oh, I almost forgot, and believe me I try,  we also have a folding slide, a small basketball hoop stand, and a small bench table.  All this for two little girls and of course the second I start cleaning, for example a toy bin, they want to start playing with all the toys inside.  It never fails.  That was the pattern today with my youngest, Sophia.  I started cleaning the play kitchen, she decided it was cooking time.  I went to the doll house next.  Here comes Sophia wanting to play house and by the way I tried to play with her and she didn’t let me. 😦  Oh well, back to cleaning.  Lucky me.  I emptied out the first toy bin, and yup Sophia was there, sorted and cleaned the keepers and without her noticing, of course, tossed a few broken toys into the garbage.  I’ve learned from the past when you throw away toys, make sure they’re not visible or else meltdown city will occur even if the toy is broken.

I’m very grateful that my kids have such items, especially since many of these toys were gifts, but sometimes you simply have to say we have too many toys.  That’s why I’m teaching my oldest to consider donating some of her toys to kids less fortunate.  We did it last year.  We went through her stuff toys and I asked her which toys she wanted to keep and which toys she wanted to give to other little kids.  She did very well.  There were absolutely no tears, and when her father came home, she told him all about it with a smile on her face.  Since she’s a year older and smarter, I hope she’ll donate more because Christmas is just around the corner, sorry but it is, and more toys are coming into this household.  I can’t put a stop to it because the grandparents are big spoilers!!